What grocers need like air – shelf life – is unfortunately an enemy to public health. In the foods we eat, it means preservatives that destroy human bodies. In the packaging that makes food last, it means petroleum based plastic that doesn’t decompose and destroys our environment.

Consumers are fighting back as they become increasingly aware. They are resisting impulse buys and often pay more just to shop at Earth friendly health friendly stores. One lost customer can result in hundreds and thousands of losses for food retailers.

Some states have stepped in and banned plastic grocery bags but such practices have hardly put a dent in the 35 Billion plastic water bottles thrown away in America alone every year. We can expect changes in the near future and fortunately we have a friend in hemp.

Hemp plastic can be completely biodegradable and takes 3-6 months to decompose. It can also be recycled indefinitely so consumers will keep using recycle bins. And unlike plastic, it is non-toxic.

35 Billion plastic bottles that won’t decay are thrown out yearly.

Hemp plastic has all of the flexibility of conventional plastic so we can expect to see a variety of products made from hemp in the near future – furniture, boats, car parts, electronics, toys, cosmetics, and of course, food packaging, wrappers, bags and bottles.

Because of its association with cannabis, hemp has historically been outlawed in many states but the laws are changing in its favor. In December 2018, President Trump made hemp legal to grow and cell in the United States. The government classifies hemp as any cannabis that contains less than 0.3% THC. Montana, Colorado, Oregon, Kentucky and Tennessee were the first states to aggressively grow industrial hemp once restrictions were lifted with Montana dedicating over 22,000 acres for hemp farming by February 2019. 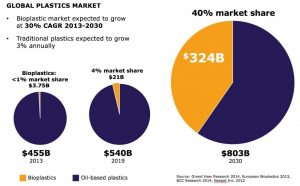 The petroleum based food packaging industry is poised for disruption. According to Grand View Research, bioplastics like hemp plastic are poised to take a 5% share of packaging by 2020 and upwards of 40% by 2030 with a 30% estimated compound annual growth rate. Aggressive legislation may increase this trend through enforcement on state and national levels, as well as through global initiatives affecting import packaging.
Tags: hemp, litter, plastic, pollution, technology